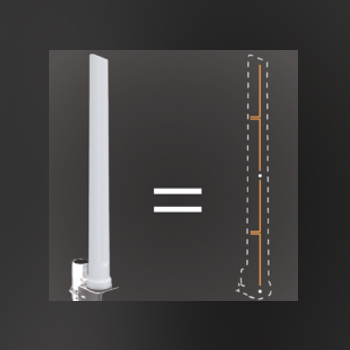 From what they explained to me a rule of thumb in which a 90° polarisation matches a coefficient of about 0, +-45 matches about 0.5 and linear vertical is about 1. They don’t mention what happens when the same polarisation antennas are spaced apart.

Your OMNI-402 has two vertically polarised spaced antennas, so does that have a bad correlation coefficient of 1? Or am I entirely wrong and have misunderstood them, which is very possible.

The figures quoted are correct but only applies when one is using only polarisation to get de-correlation.

The OMNI-402 uses space diversity to achieve correlation/decorrelation. While polarisation gives a very simple way to compute the correlation coefficient, it is not that easy for space diversity since it depends on a lot of environmental factors (antenna heights, reflection from the ground and other reflections).

Typically the values required for the modem above are met by two well-spaced antennas (which we have in the OMNI-402). The correlation coefficient gets better (lower) at higher frequencies since the antennas are spaced further apart vertically in terms of wavelength – remember wavelength spacing gets bigger when frequency gets larger.

The idea that ours gives “1” is certainly completely wrong unless the two antennas were in one place (i.e. we just split the signal in two which would be garbage which is the same as a correlation of 1 since this is useless).

The  90-degree polarisation split is, of course, often ideal, but adding a horizontally polarised omni to a vertically polarised one results in a fairly “massive” antenna which will be about as wide as it is long! One can use two omni antennas mounted 90 degrees to each other but this is clumsy and has the problem that the horizontally mounted one is not at all “omni” which kills the MIMO benefit except for some azimuth angles.

Quite reasonable correlation coefficients (between 0.1 and 0.5) are easily achieved in multipath (reflective) environments. Clearly, at least one reflector (the earth) is always there that makes vertical spacing more likely to work in the absence of horizontal reflections from buildings etc.

Please contact us at info@poynting.tech or sales-europe@poynting.tech for more information on our OMNI-402 which is a 2×2 MIMO MARINE & COASTAL ANTENNA that covers the 450MHz–2700MHz band or any other product.